How To Train Your Dragon Live Spectacular 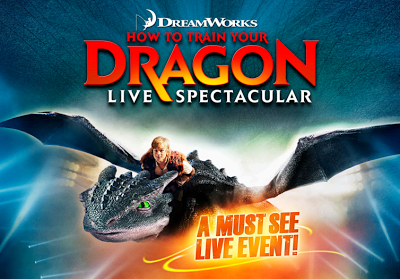 There's an exciting, new live show coming to the Honda Center in Anaheim in 2013!

How can you go wrong with reviews like these?

“Not only will it make you believe in dragons, you’ll believe a dragon can fly.”
– Pittsburgh Post-Gazette

“A visual and technical work of mind-boggling proportions.”
– Australian Stage

“A dazzling fusion of art and athleticism.”
– Entertainment Weekly

And if you're still not convinced, take a look at this trailer:

About How To Train Your Dragon Live Spectacular:

Inspired by the hit movie How To Train Your Dragon, this live event is a never-before-seen production that audiences of all ages will never forget. HOW TO TRAIN YOUR DRAGON LIVE SPECTACULAR features more than a dozen dragons, some with wingspans of up to 46 feet, Viking warriors and world-class circus artists and acrobats combined with a heartwarming story that truly delivers a once-in-a-lifetime experience for the entire family.

Fire-breathing action, epic adventure and heartfelt laughter come together in a captivating story set in the mythical world of Vikings and wild dragons.  Based on the book by Cressida Cowell, it centers on Hiccup, a Viking teenager who doesn’t fit in with his tribe’s longstanding tradition of heroic dragon slayers.  Hiccup’s world is turned upside down when he encounters a dragon that challenges him and his fellow Vikings to see the world from an entirely different point of view.

Sponsored by HP, HOW TO TRAIN YOUR DRAGON LIVE SPECTACULAR is brought to life through state-of-the-art technology unlike anything ever seen before in a live event experience.  Through DreamWorks Animation’s ongoing strategic relationship with HP, HP technology is part of the digital backbone for the production, providing family audiences across the globe with the most captivating live entertainment possible.

HOW TO TRAIN YOUR DRAGON LIVE SPECTACULAR breaks every rule of theatrical entertainment to fully immerse audiences into the show in ways that have not been attempted before. Barely contained within the arena, HOW TO TRAIN YOUR DRAGON LIVE SPECTACULAR utilizes the full venue, maximizing every dimension of the performance space to transport audiences into a mythical world of fire-breathing dragons who soar overhead at great speeds. The state-of-the-art animatronic technology and large-scale cinematic projections interact seamlessly with the live actors, who bring DreamWorks Animation’s heart-warming story to life through theatrical storytelling, martial arts and acrobatics.

Go to www.dreamworksdragonslive.com for on-sale dates and other ticket information.  Check back for additional tour markets in 2013 which will be announced soon.
Posted by SprMama at 11:43 PM 0 comments

I LEARNED A NEW LIFE LESSON

This past week, my 8 year old son taught me a life lesson.

He wanted to be the 3rd grade class representative to the Student Council.  Unfortunately, the majority of the class voted for someone else.  I was crushed when he told me about this.  I didn't feel sorry for him.  Instead, my heart broke.  I knew he wanted this position.  He had been talking about it all summer.  He thought it would be great if he and his older brother, the Student Council President, were on Student Council at the same time.

He was quiet after he told me the bad news.  He has always been my "thinker".  He tends to process situations and people silently before expressing his thoughts.

The silence was killing me.  I needed to know what he was thinking.  I already knew what he was feeling.  It was written all over his face.  He was holding back tears. His voice cracked when he finally spoke.

"I'm sad I'm not the class representative, but I'm really happy she won.  She deserves it.  I just know she'll do a good job.  She was so happy when she found out she's the class rep."

I said, "I'm sorry you lost.  I know you really wanted this."

Wow! I was stunned.  Now it was my turn to hold back the tears.  It was my voice that cracked when I finally found the words to say to him:  "I'm so proud of you and I love you no matter what."

I can't tell you how many times I've been passed over for a blogging opportunity.  Yes, I always feel bad when that happens.  My first question is usually "What's wrong with me?" Followed by, "I lost, someone else won what I wanted.  Maybe I'm not good enough."  This thought process then puts me in a funk that only a bar of Lindt milk chocolate can get me out of.

When did my 8 year old son become so wise?  At that moment, I vowed to stop feeling sorry for myself.  My son had just  taught me a whole new way of looking at lost opportunities:


It's not a matter of losing.  It's just not your turn yet.  Try again.