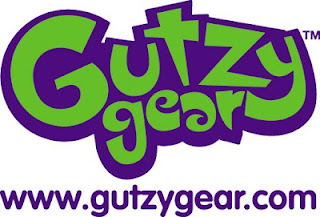 I had only seen Gutzy Gear on one of those TV infomercials a couple of times before I received an email from MomSelect and BSM Media saying I was chosen to host a Gutzy Gear party.  My kids, apparently, knew all about Gutzy Gear and were excited.  As a Gutzy Gear in-home party host, I received a package filled with Gutzy Gear straps, Gutzies (patches) and fun games and activity ideas.

So what exactly is Gutzy Gear?

Gutzy Gear is the new "must have" accessory.  Gutzy Gear straps and Gutzies are a great way for kids  to express themselves by customizing their backpacks, duffel bags, messenger bags and virtually anything that has a strap!  Gutzies are cool, removable patches that stick to the Gutzy strap covers.  To date, there are 56 Gutzies in a series, with more on the way.

Gutzy Gear is not just an accessory, it is also a way for kids to express themselves and to make friends by trading Gutzies.

Getting Gutzy is simple:

With that in mind, I invited 12 kids (plus my 3) over for some pizza, popcorn, Gutzy Gear and games like  Gutzy dominoes and bingo! 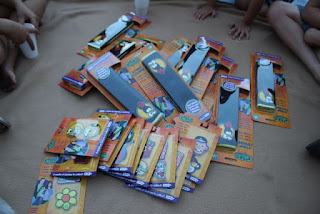 This is what the Gutzy straps look like on my kids' backpacks.  As you can see, we've purchased more Gutzies since the party! The other moms at the party have told me they've bought some new Gutzies for their kids as well.

Each pack of Gutzy Gear starter kit comes with 2 straps and 1 Gutzy patch (MSRP: $9.99).  Additional Gutzies (MSRP: $3.99-$4.99) can be purchased.  Each pack comes with 2 Gutzies.  Gutzy Gear is available in major retailers like Toys R Us, Walmart, Kmart and Target.

What are you waiting for?  Go Get Gutzy!!

** I applied and was selected to be a Gutzy Gear in-home party host by MomSelect and BSM Media.  As a host, I received a Gutzy Gear Get Together kit which included Gutzy Gear starter kits and Gutzy patch sets.  I was not monetarily compensated for this post.  All opinions and pictures are my own.